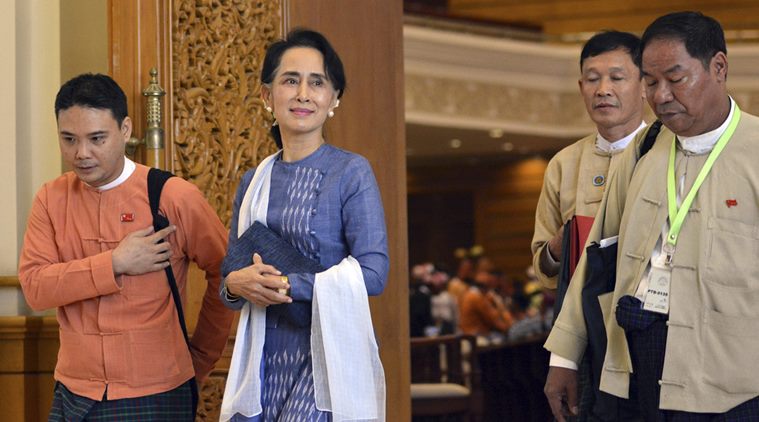 In this Friday, March 11, 2016 photo, National League for Democracy (NLD) party leader Aung San Suu Kyi, second left, leaves Parliament building in Naypyitaw, Myanmar. A longtime confidante of Suu Kyi was confirmed Friday in a parliamentary vote as one of the three final candidates to be Myanmar's next president, albeit as a proxy for the Nobel laureate. (AP Photo/Aung Shine Oo, File)

The United States has eased some sanctions on Myanmar as incentive to support the newly elected civilian government to reform towards democracy and facilitate economic development.

“We did this to demonstrate support for the new government’s democratic reforms and to promote broad-based, inclusive economic development“, said US State Department spokesperson John Kirby.

The steps announced by the Department of the Treasury were intended to support trade, facilitate the movement of goods, allow certain incidental transactions related to certain individuals residing in Myanmar, and to allow more transactions involving designated financial institutions in the country, he said.

The measures to ease sanctions would affect trade and financial transactions, which have been restricted between the two countries for a long time since the military rule in 1988.

The easing of sanctions this week was a major move by Washington to support the first civilian government in half a century led by President Htin Kyaw and Nobel Laureate Aung San Suu Kyi.

Secretary of State John Kerry will visit Myanmar on May 22 to meet with leaders in Nay Pyi Taw to signal US support for the democratically elected, civilian-led government and further democratic and economic reforms, a statement by the State Department said.

Myanmar welcomed the US decision and hoped the easing of economic sanctions would help boost trade and investment between the two countries.

“It is a good move. I hope bilateral trade will get a boost starting from this year, given the recent easing of some sanctions. Obviously, our trade volume will also increase, thanks to the potential increase in bilateral economic activities,” said Maung Aung, an economist and senior adviser to the Commerce Ministry.

Myanmar’s state-owned enterprises such as those involved in mining, timber and jade would be able to do business with their counterpart from the US.

“The lifting of the sanctions may result in more quality exports from Myanmar, especially gems and jewelry, and garment. Our export market should not rely only on China. So, the US may become our next export target in the future, said Than Lwin of KBZ bank.