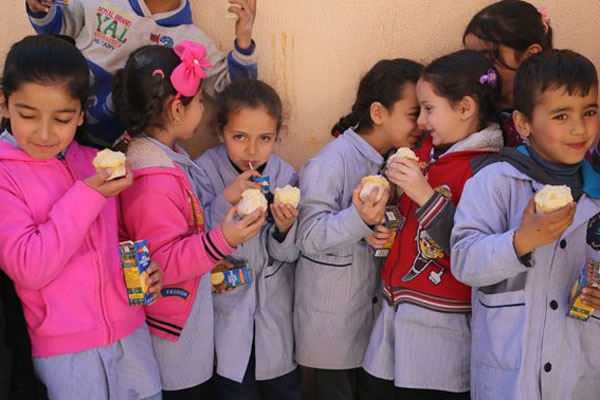 A carton of milk or juice, locally-baked snacks and a piece of fruit are included in a school lunch that some children in Lebanon are receiving, as part of a meals programmed launched by the United Nations food relief agency.

Some 10,000 vulnerable Lebanese and Syrian refugee children received the schools meals in March, the UN World Food Programme announced, allowing them energy to focus more on their studies.

“By providing children with daily, nutritious meals at school, WFP can ensure improved nutritional intake for these children as well as encouraging their parents to send them to school regularly,” said WFP Lebanon Country Director Dominik Heinrich.

He added that “education is vital to equip the youth of Lebanon and Syria with the tools they will need to contribute to a region that is going through such turmoil and difficulty.”

Over the past five years, more than one million Syrian refugees have attended Lebanon’s public schools. In response, more than 250 public schools have introduced a double shirt system, to allow the enrolment of additional students.

The WFP school meals programmed is funded by the Italian Development Cooperation, and is being carried out in close coordination with the Ministry of Education and Higher Education and the Office of the UN High Commissioner for Refugees (UNHCR).