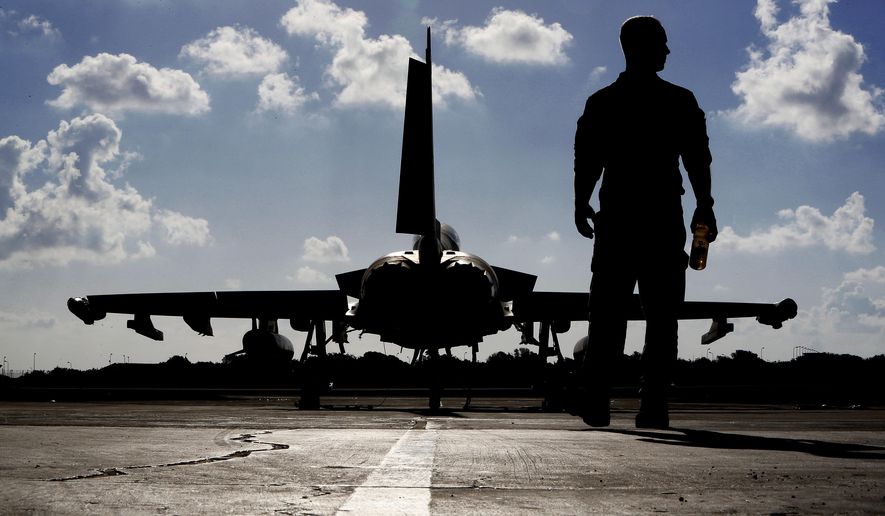 AKROTIRI, Cyprus (AP) – British Tornado and Typhoon aircraft stationed at a U.K. air base in Cyprus are pounding Islamic State targets ahead of a major offensive by Iraqi security forces next month to recapture the key northern city of Mosul from IS militants, a senior Royal Air Force officer says.

Air Commodore Sammy Sampson said Iraqi forces are confident they can retake the country’s second-largest city from IS and that British warplanes will provide the needed support to get the job done.

“We’ll stand by them. We’ll support them. We will make it do-able for them,” Sampson told reporters Thursday on a guided tour of the RAF Akrotiri base’s operations.

Sampson said the eight Tornado and six Typhoon aircraft flying out of RAF Akrotiri have in recent days destroyed numerous IS targets to pave the way for the start of the advance on Mosul in the coming weeks. Mosul is the IS group’s last major urban stronghold in Iraq, 360 kilometers (225 miles) northwest of Baghdad.

U.S. officials have said for some time that they expect the Mosul operation to begin in October.

One Typhoon strike last week hit an IS training camp just inside Iraq on its border with Syria, killing some 40-50 fighters, said Sampson. The aircraft later destroyed IS weapons stockpiles and rocket launchers north of Ramadi in support of Iraqi forces.

But Sampson, who commands the U.K.’s warplanes in the U.S.-led coalition against IS, said air strikes to start reclaiming territory from IS both in Iraq and Syria are far from new.

“We were striking targets to weaken (IS-held) Mosul from the very beginning of the campaign,” said Sampson, who is based in the Combined Air Operations Center in Qatar.

Sampson said the same applies for the Syrian city of Raqqa, which the IS considers its de facto capital. He said air strikes in the Syrian city are “part of the plan” until the decision is made “how and when the liberation of Raqqa is going to be achieved.”

Sampson said air power has made the difference in beating back IS over the last two years as the extremist group has tried to carve a caliphate out of Syria and Iraq.

“I’ve seen air power help transform the situation on the ground,” said Sampson, adding that while IS militants were advancing aggressively two years ago, the group is now “on their heels, and we can see that every day.”

“The air component and the air support have helped partner forces on the ground. And in many, many areas, those partner forces have stopped Daesh (the Arabic acronym for IS) dead in their tracks,” said Sampson.

Air power has also lifted morale among Iraqi forces, he said, which has allowed them to retake the battlefield initiative from IS, knowing that they can rely on “the most sophisticated air package anyone has ever used.”

He said a deflated Iraqi army that was once “intimidated” and “hesitant” to emerge from their garrisons and take the fight to the militants is now aware that air power has given them an “immense amount of capability.”

“I do not think our relationship with our partner forces could be any better,” said Sampson. “We have never failed them. When they want us, we are there.”

Another key component of the air campaign is the intelligence that aircraft have been able to collect with sophisticated on-board equipment on how IS operates, which have allowed coalition forces to shift tactics to make the airstrikes more effective.

“We are adapting our processes, our procedures, our tactics, our understanding, every single minute of every day. I’m absolutely confident that we’re outpacing Daesh in that area,” said Sampson.

Since the start of the September 2014 air campaign against IS, Typhoon and Tornado jets based at RAF Akrotiri have dropped a combined 1,600 bombs and missiles on IS targets.

On a mission Wednesday, a Tornado dropped a Paveway laser-guided bomb and sunk an IS boat ferrying a truck bomb across Iraq’s Tigris river. On the same mission, a Typhoon killed three IS fighters after hitting their bunker in a palm grove on the northern bank of the Euphrates with two bombs. An Associated Press reporter and photographer were among a handful of journalists permitted to fly aboard the U.K.’s Voyager tanker aircraft, which conducted midair refueling for those warplanes over central Iraq.

“Daesh is falling back and not making any advances, and air support has been a strong enabler of that,” said a Typhoon pilot who spoke on condition of anonymity in line with British Ministry of Defense rules. “I can’t think of anything better than helping someone trying to save their country.”