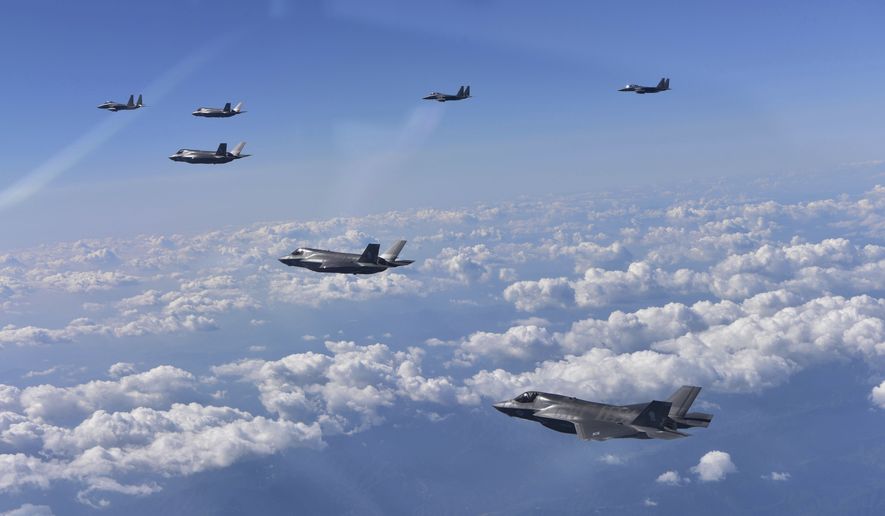 SEOUL, South Korea (AP) — The United States flew some of its most advanced warplanes in bombing drills with ally South Korea on Thursday, a clear warning after North Korea launched a midrange ballistic missile designed to carry nuclear bombs over Japan earlier this week, South Korea’s military said. North Korea hates such displays of U.S. military might at close range and will likely respond with fury.

Two U.S. B-1B supersonic bombers and four F-35 stealth fighter jets joined four South Korean F-15 fighters in live-fire exercises at a military field in eastern South Korea that simulated precision strikes against the North’s “core facilities,” an official from Seoul’s Defense Ministry said. The B-1Bs were flown in from Andersen Air Force Base in Guam while the F-35s came from a U.S. base in Iwakuni, Japan, the official said. He didn’t want to be named, citing office rules.

The North, which claims Washington has long threatened Pyongyang by flaunting the powerful U.S. nuclear arsenal, describes the long-range B-1Bs as “nuclear strategic bombers” although the United States no longer arms them with nuclear weapons. A strong North Korean reaction to the drills is almost certain.

The bombing exercise came as the United States and South Korea wrapped up their annual Ulchi Freedom Guardian joint military drills that involved tens of thousands of soldiers. North Korea condemns the annual U.S.-South Koreawar games as rehearsals for an invasion and described Tuesday’s launch over Japan as a countermeasure against the drills. Washington and Seoul faced calls to postpone or downsize this year’s drills.

The United States often sends its warplanes to South Korea, mostly for patrols, when animosity rises on the Korean Peninsula, which is technically in a state of war because the 1950-53 Korean War ended with an armistice, not a peace treaty.

North Korea on Tuesday flew a potentially-nuclear capable Hwasong-12 intermediate range missile over northern Japan and later called it a “meaningful prelude” to containing the U.S. territory of Guam. North Korean leader Kim Jong Un said the launch was a “curtain-raiser of its resolute countermeasures” against the U.S.-South Korea war games and called for his military to conduct more ballistic missile launches targeting the Pacific Ocean.

North Korea has been maintaining a torrid pace in weapons tests this year as it openly pursues an arsenal of nuclear-armed, intercontinental ballistic missiles capable of reaching deep into the U.S. mainland. Experts say Kim wants a real nuclear deterrent against the United States to ensure the survival of his government and likely believes that it will strengthen his negotiating position when North Korea returns to talks.

Pyongyang had earlier threatened to fire a salvo of Hwasong-12s toward Guam, which is home to key U.S. military bases and strategic long-range bombers the North finds threatening. It also flight tested a pair of developmental ICBMs in July.

South Korean analysts said that the North’s threat against Guam and the launch over Japan on Tuesday are likely attempts to make launches over Japan an accepted norm and win itself greater military space in a region dominated by enemies.

The U.S. and South Korean militaries say the Hwasong-12 the North fired over the northern Japanese island of Hokkaido flew for about 2,700 kilometers (1,677 miles). South Korea’s Vice Defense Minister Suh Choo-suk told lawmakers on Thursday that the North might have fired the missile at about half its maximum range.