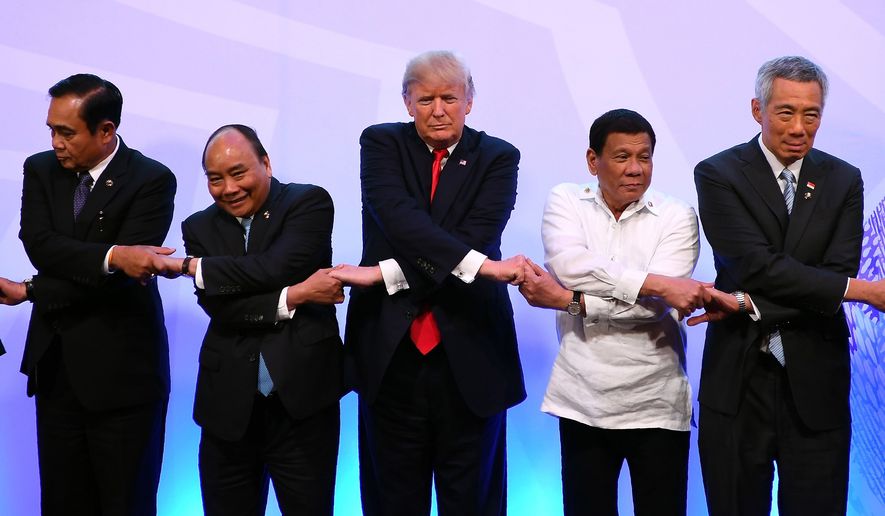 TOKYO — President Trump wrapped up his marathon trip through Asia on Tuesday, citing progress on trade deals, greater respect in foreign capitals for U.S. power and prestige, and reassurance of allies over nuclear tensions with North Korea.

As Mr. Trump departed an economic conference in The Philippines at the end of the 12-day trip, the longest by a U.S. president in 25 years, he described his efforts as “very fruitful.”

“We’ve made a lot of big progress on trade,” said Mr. Trump, pointing to business deals forged between U.S. and foreign companies. “We have deficits with almost everybody; those deficits are going to be cut very quickly and very substantially.”

Due to arrive in Washington late Tuesday night, the president said he will make major announcements on trade and North Korea on Wednesday at the White House.

While Mr. Trump’s state visit to China was viewed as the marquee stop of his five-nation tour, the president’s high-stakes speech to South Korea’s national assembly on the North Korean nuclear threat was arguably the biggest moment of the trip. Analysts on the Korean Peninsula said Mr. Trump succeeded in lowering tensions while showing firm resolve in his demand to denuclearize North Korea.

After anxiety over Mr. Trump’s earlier threat to meet North Korea’s aggression with “fire and fury,” the president’s stop in South Korea was “short but effective,” said BJ Kim, a former South Korean diplomat who teaches at Hankuk University of Foreign Studies in Seoul.

“South Koreans were pleasantly surprised and felt suddenly reassured as they found in his words a new kind of Donald Trump who seems to actually understand the history, the countries and the people involved regarding the current North Korea crisis,” Mr. Kim told The Washington Times. “Before Trump’s arrival, sense of anxiety was widely spread in Seoul.”

Prior to the speech, Mr. Kim said, “the biggest fear in Seoul has been the possibility of the U.S. bypassing South Korea, striking Pyongyang and thus inviting massive retaliation from the North.”

“After the Nov. 8 National Assembly speech, South Koreans are shedding their image of Donald Trump who haphazardly sees South Korea just another faraway country he does not want to understand,” he said. “The worries of sudden outbreak of a war have been considerably assuaged.”

“Why would Kim Jong-un insult me by calling me ‘old,’ when I would NEVER call him ‘short and fat?’ Oh well, I try so hard to be his friend – and maybe someday that will happen!” the president tweeted.

North Korean officials described Mr. Trump’s visit as “nothing but a business trip by a warmonger to enrich the monopolies of the U.S. defense industry.”

“Trump, during his visit, laid bare his true nature as destroyer of the world peace and stability and begged for a nuclear war on the Korean Peninsula,” Pyongyang’s foreign ministry said in a statement.

Mr. Trump said the pomp and pageantry of his Chinese welcome was a proper tribute for him and for the U.S.

“It was red carpet like nobody, I think, has probably ever received,” Mr. Trump said. “And that really is a sign of respect, perhaps for me a little, but really for our country. And I’m really proud of that.”

Mr. Kim said the president also succeeded in highlighting that Beijing and Moscow must be part of the solution to dismantling Pyongyang’s nuclear weapon and intercontinental ballistic missile programs.

“South Koreans saw the world being reminded that the North Korea issue is a global problem the entire world community — including China and Russia — will need to come together to solve,” he said.

Analysts in Tokyo said Mr. Trump was taken “very seriously” by Japan’s foreign policy establishment despite the Japanese public’s relative distaste for him. Polls prior to the visit showed only about 25 percent of Japanese people had confidence in Mr. Trump.

While Prime Minister Shinzo Abe, the only foreign leader who visited Mr. Trump at Trump Tower before his inauguration in January, rolled out the red carpet for the president, journalists in Tokyo had mixed opinions about the Japan leg of the trip.

Hideo Iwasaki, a member of the management team at Mainichi Shimbun, a major newspaper in the Japanese capital, told The Washington Times that Mr. Abe “clearly made an effort to appear close to Trump,” but it was not clear whether the Japanese public viewed the visit in a positive light.

Kosuke Takahashi, a longtime Japanese journalist working as the Tokyo correspondent for Jane’s Defense Weekly, said Mr. Trump’s comments about the need for Tokyo to buy more American weapons and shoot down the next missile North Korea fires over Japan were viewed with skepticism by Mr. Abe’s critics.

“In my view,” he told The Times, “President Trump has been fueling North Korean crisis by conducting fierce verbal attacks against North Korea’s Kim Jong-un intentionally. As a result, stock prices of U.S. defense companies such as Boeing, Lockheed Martin, Raytheon and Northrop have been skyrocketing as they can sell expensive weapons such as Aegis missile defense system to Japan and South Korea. Trump is showing very good at top sales diplomacy.”

Others said there was no question the Tokyo visit was a success, but raised doubts about Mr. Trump’s comments on the prospect of Japan shooting down a North Korean missile.

Ambassador Tesuya Endo, a former Japanese diplomat who served as an envoy to Japan-North Korea normalization attempts during the 1990s suggested Japanese foreign policy elites were skeptical of the comments.

“Do you think what Mr. Trump said is a realistic approach?” Mr. Endo mused in an interview with The Times in Tokyo. “I don’t think so. His comments on this, it seems to me, weren’t taken seriously here.”

The stakes would be dangerously high if Japan were to shoot down a North Korean rocket, he added.

“It would be a violation of international law by Japan, and if we missed, it would raise great doubts about the reliability of Japan’s missile defense,” Mr. Endo said. “If it hits or succeeds in knocking out a North Korean missile, the situation may deteriorate badly and quickly.”

“The key for us is to ensure very close trilateral cooperation so as to bring peace and stability on the ground,” said the Japanese leader.

Mr. Turnbull said Australia will work with the U.S. to ensure stability.

“We’ve got the same values and the same focus on ensuring that the North Korean regime comes to its senses and stops its reckless provocation and threats of conflict in our region,” he said.

As they met, three U.S. aircraft carrier strike groups were participating in a massive naval drill in the western Pacific waters as a show of force.

On the final leg of the trip, Mr. Trump repeatedly praised Philippine President Rodrigo Duterte, who has overseen a bloody drug war that has featured extrajudicial killings. Mr. Trump told reporters that he and Mr. Duterte have “had a great relationship.”

The leaders later issued a joint statement saying that “the two sides underscored that human rights and the dignity of human life are essential, and agreed to continue mainstreaming the human rights agenda in their national programs.”

Mr. Duterte’s actions have alarmed human rights advocates, who say as many as 9,000 people have been killed in the crackdown on drug trafficking.