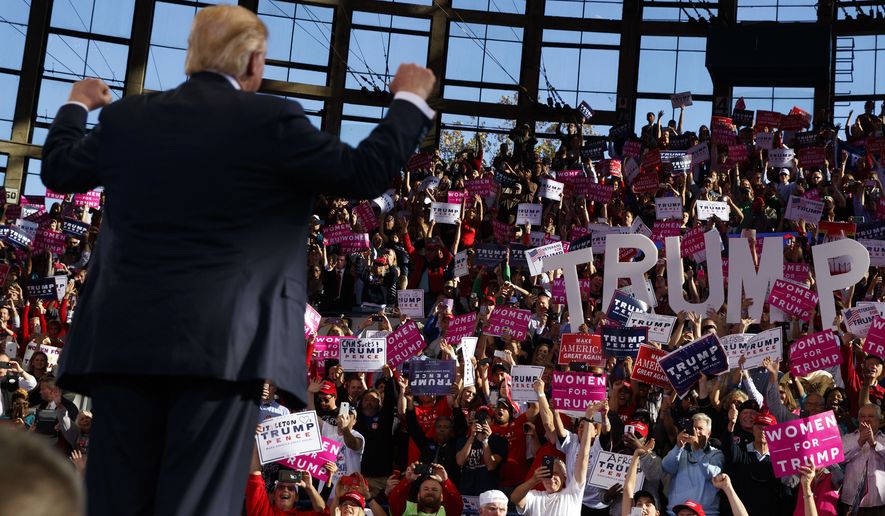 President Obama bequeathed his political legacy to Hillary Clinton on Monday as they campaigned together hours ahead of Election Day, asking voters to stay the course and reject the kind of change represented by Republican nominee Donald Trump.

But Mr. Trump challenged voters to overthrow the corrupt Washington status quo that he said Mrs. Clinton embodies, highlighting the deep contrast between the two campaigns one final time before voters go to the polls Tuesday and choose the 45th president.

“If we win, the corrupt politicians and their donors lose,” Mr. Trump said at a rally in Sarasota, Florida. “If they win, the American people lose big-league. This is it, folks. We will never have another opportunity. Not in four years. Not in eight years. It will be over.”

Mr. Trump’s last attempt to claim the mantle of change ahead of the momentous election could not have been more different than the last-minute plea from Mrs. Clinton, who has not only embraced Mr. Obama’s legacy but has outright vowed to continue many of the current president’s policies.

The president, who has become perhaps the most important Clinton surrogate during the closing stretch of the campaign, put his own credibility on the line and told blue-collar workers in Michigan — many of whom may have lost their jobs were it not for the auto industry bailouts under Mr. Obama and President George W. Bush — not to trust Mr. Trump.

“In his 70 years on earth, the Donald has never shown any regard for working folks. I don’t think he knows working people, except for the people who clean up in his hotels or mow the fairway on his golf course,” Mr. Obama said. “He didn’t care about working people then, he won’t now.”

Heading into Tuesday, Mrs. Clinton and Mr. Trump were locked in a close race across most of the battleground states that will decide the election, such as Florida, North Carolina, Ohio and Pennsylvania.

However, Mrs. Clinton continued to edge out the billionaire businessman in national polls that typically reflect the trajectory of the race. The Real Clear Politics average of recent national polls put Mrs. Clinton ahead of Mr. Trump by 3.2 points in a four-way race that included Libertarian nominee Gary Johnson and Green Party candidate Jill Stein.

In the past month, Mr. Trump came out on top in three out of about 60 polls of a four-way race, making the former secretary of state the clear favorite heading into Tuesday.

One of the outlier polls, Investor’s Business Daily/TechnoMetrica Market Intelligence poll, which has been the most accurate poll in recent presidential elections, showed Mr. Trump leading Mrs. Clinton by 2 points, 43 percent to 41 percent.

While the presidential race has the highest profile, Americans will also elect a new Congress on Tuesday, with all 435 House and 34 Senate seats up for grabs. Democrats would need to pick up 30 seats to take control of the House but just five to seize the Senate (or four if Mrs. Clinton wins the presidency and running mate Tim Kaine becomes vice president and casts deciding votes).

With a massive Democratic landslide appearing unlikely, political analysts said Republican control of the House looks secure, with only 40 races even being considered competitive by Roll Call and The Cook Political Report.

But the Senate still hung in the balance with about eight tight races — all but Nevada being for Republican-held seats. The Nate Silver polling site fivethirtyeight.com gave Republicans a 50.8 percent chance of holding onto the chamber.

In her closing pitch to voters to make her the first female president, Mrs. Clinton cast Mr. Trump as a dangerous candidate from outside the normal political universe — a figure whom even clear-thinking Republicans ought to reject for the good of the country.

“I’ve known a lot of the Republicans who have run for president, been elected president in recent history. I didn’t agree with them on everything, obviously. But I didn’t doubt they were fit to serve as president,” Mrs. Clinton told an audience in Pittsburgh, one of two election-eve stops in Pennsylvania on Monday.

“This election is different,” she continued. “This person is temperamentally unqualified, experientially unqualified to be commander in chief, and so many people know that. So I think we do need some more love and kindness. We have got to rise above all of this hate-filled rhetoric, all of these insults and scapegoating and finger-pointing and insulting.”

In Florida Mr. Trump reiterated his promise to repeal and replace Obamacare, defend religious liberty and build a border wall along the U.S.-Mexico boundary that would stem the flow of illegal immigrants and drugs coming into the country.

He vowed to cut individual and corporate taxes and “bring back” jobs by renegotiating trade deals and slapping tariffs on imports from American companies that relocate facilities overseas.

And he issued a stinging rebuke of Mrs. Clinton, saying the FBI’s handling of an investigation into her secret email server has turned the country into an international “laughingstock.”

“Now it is up to the American people to deliver justice at the ballot box tomorrow,” the billionaire said. “I want the entire corrupt Washington establishment to hear the words we are all about to say: When we win tomorrow, we are going to drain the swamp.”

While Mr. Trump has succeeded in bringing millions of new voters off the sidelines — he captured more votes in the Republican primary than any candidate before him — he’s also alienated a great number of Republicans, including high-profile governors, senators, representatives and pundits who have refused to embrace his candidacy.

Throughout the fall, the Clinton campaign has actively courted Republicans. Mrs. Clinton’s direct appeal to coal miners in Pittsburgh highlighted how the Clinton campaign is eager to reach into Mr. Trump’s supposed base and deliver the kind of landslide victory that would allow her to claim a clear mandate from the American people.

“I will not forget you, and I will do everything I can to help people who have given so much, worked so hard throughout their lives to build this country,” she told a man at the Pittsburgh rally holding a “coal miners for Hillary” sign. “We are not going to forget any Americans.”

Mrs. Clinton also ticked off other pieces of her campaign agenda, including an aggressive effort to fight climate change, a raise in the federal minimum wage, equal pay for women, a massive investment in infrastructure paid for through taxes increases on the rich and debt-free college for almost all Americans.