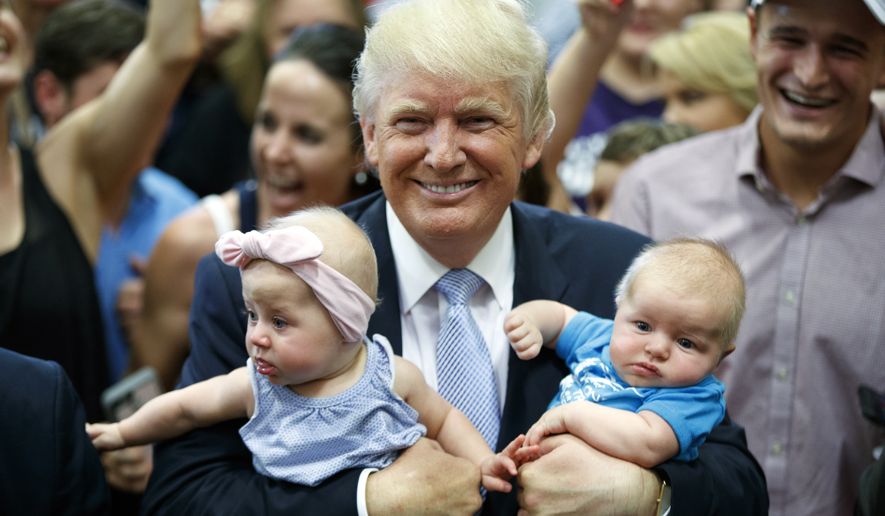 Trump gets an edge in the presidential marketing war

Posted By: Sin Sidaraon: August 01, 2016In: Entrepreneur, Life and Love
By Jennifer Harper

The money spent on advertising and marketing so far in the 2016 presidential race is unprecedented. Consider, for example, that by the time the Democratic National Convention rolled around last week, Hillary Clinton’s campaign had already shelled out $220 million on radio and TV ads alone, mostly to blast Republican rival Donald Trump.

Some may fret that this important, unpredictable race could devolve into a battle of the political brands, pitting the progressive prowess of Mrs. Clinton against the determined populist appeal of Mr. Trump. Is there a danger of advertising overload in this election — when a presidential candidate’s authentic leadership skills are overshadowed by branding and slick packaging?

“The simple answer is no. The reason is that both candidates, Trump and Clinton, have extremely strong and established brands. Marketing can reinforce these brands, and that should be their focus,” Dave Marinaccio, co-founder and chief creative officer of Laughlin Marinaccio & Owens Marketing, tells Inside the Beltway. He has crafted campaigns for McDonald’s, Sunkist and the National Guard, among many national brands.

“But as an adman, I say bring on the overload,” adds Mr. Marinaccio, author of the book “Admen, Mad Men, and the Real World of Advertising,” which reveals that the average consumer is bombarded with some 3,000 advertising “intrusions” a day in all manner of media — print, broadcast, social media, commercial logos, billboards and so forth and so on. American voters are not immune from this phenomenon.

“The most important ingredient in marketing is to stake out a unique claim that differentiates your brand from everybody else’s brand. Love him or hate him, that’s exactly what Donald Trump has done, starting with his classic rant against Mexican immigrants,” the two write in a new campaign analysis for Ad Age.

“It’s the old marketing maxim: Ignore your competition, don’t debate them. The minute you debate your opponent, you create the impression that they have a legitimate argument. So the media is turning out to be Trump’s biggest ally, the opposite of what many of them intended. Hillary Clinton, on the other hand, made the classic marketing mistake. She has not focused on one specific issue. Nor have any of her issues created much controversy,” the two continue.

“She tries to appeal to everyone by giving away all kinds of goodies to children, students, parents and retired people. She should have heeded the old marketing principle: If you try to appeal to everybody, you’re in danger of appealing to no one.”

With less than 100 days to go before Election Day, the candidates have embarked on classic grass-roots roadwork. On Monday GOP nominee Donald Trump stages jumbo rallies in Columbus, Ohio, and Harrisburg, Pennsylvania. His running mate, Gov. Mike Pence, will appear at town halls in Carson City, Nevada, and Reno, Nevada. He’ll then head for rallies all on his own in Tucson and Phoenix in Arizona, plus Virginia Beach as the week roars on.

Following a three-day bus tour through Pennsylvania and Ohio, Democratic nominee Hillary Clinton will be in Omaha, Nebraska, on Monday, while her running mate, Gov. Tim Kaine, will attend a “homecoming” rally in Richmond, Virginia. And like his rival Mr. Pence, the governor also rushes down the campaign trail solo, bound for Daytona Beach, Florida, and Greensboro, North Carolina, by Wednesday.

Once upon a time, Democratic candidate Bill Clinton told voters during his 1992 White House campaign that they would be getting “two for the price of one” if he was elected. He was referring to then-future first lady Hillary Clinton, whose serious interest in shaping national policy — particularly health matters — was not veiled.

Time marches on. The roles are reversed. Should Mrs. Clinton win the presidency, will her two-term hubby be satisfied to sit decoratively on the sidelines as the nation’s inaugural “first gentleman”? Americans don’t think so, apparently.

A new Rasmussen Reports survey finds that 70 percent of likely U.S. voters believe Mr. Clinton will be involved in his wife’s policy decisions if she is elected president, with a sizable 30 percent who say he will be “very involved.” Another 22 percent say the former president will not be too involved in Mrs. Clinton’s policy decisions, but that includes only 3 percent who think he “won’t be involved at all.”

Voters have favorite TV shows according to their political persuasion, says one researcher.

“Democrats prefer shows that are sexy, edgy and emotionally involving. Republicans prefer shows that are family-friendly, funny and depict good vs. evil,” says a new analysis by Los Angeles-based E-Poll Market Research, which tracked the favorites among 750 prime-time broadcast, cable and streaming programs among Americans of voting age, either Republican or Democrats. Here’s what the group found:

The top 10 for Democrats: “Game of Thrones,” followed by “The Haves and the Have Nots,” “Supernatural,” “The Big Bang Theory,” “Suits,” “The Walking Dead,” “How to Get Away with Murder,” “Doctor Who,” “Empire” and “Nashville.”

• 54 percent of likely U.S. voters still favor the presidential candidate they liked at the beginning of 2016; 48 percent of Republicans, 43 percent of independents and 68 percent of Democrats agree.

• 28 percent overall have switched their support to another candidate; 36 percent of Republicans, 27 percent of independents and 23 percent of Democrats agree.

• 15 percent overall are still undecided about their choice of candidate; 12 percent of Republicans, 26 percent of independents and 8 percent of Democrats agree.