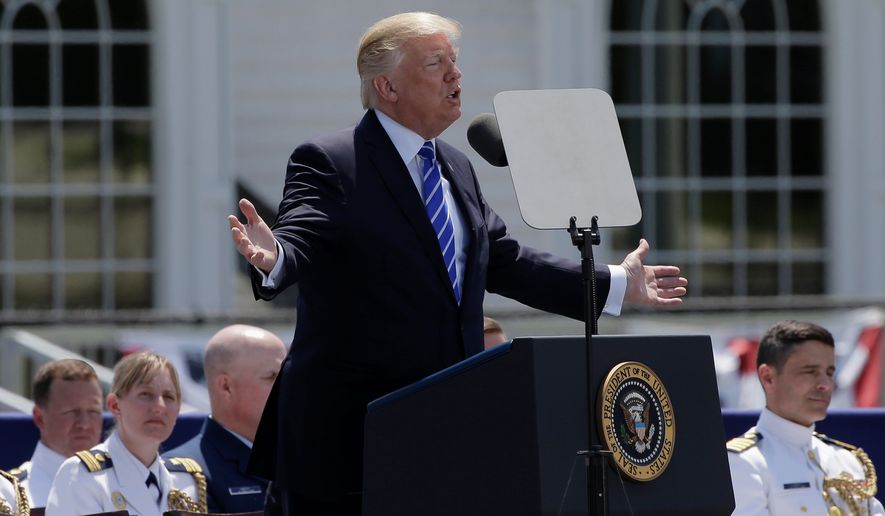 Under siege from the Washington news media, deep-state opponents and the political establishment, PresidentTrump has been forced to consider a White House shake-up and look to a trip abroad for a chance to regain his footing.

The turmoil engulfing the White House — including accusations that the president is in cahoots with Russian spies and calls for impeachment over unsubstantiated charges that he obstructed an FBI investigation — has rattled members of the Republican Party and all but derailed Mr. Trump’s agenda on Capitol Hill.

But Mr. Trump, who has been treated by Democrats and much of the news media as a criminal and illegitimate successor to the White House since his upset victory in November, vowed to keep fighting.

“You have to put your head down and fight, fight, fight. Never ever ever give up,” Mr. Trump told the graduating class Wednesday at the Coast Guard Academy in New London, Connecticut, offering his own experiences as an example of perceived injustices.

“Look at the way I’ve been treated recently, especially by the media. No politician in history — and I say this with great surety — has been treated worse or more unfairly,” he said in the commencement address. “You can’t let them get you down. You can’t let the critics and naysayers get in the way of your dreams.”

It was the same fighting spirit that helped Mr. Trump beat the odds in the presidential election.

Still, unrelenting controversy and hysteria in Washington is taking a toll.

Stocks tumbled Wednesday with analysts blaming uncertainty about the prospects for the Trump presidency and his pro-business agenda.

The Dow Jones industrial average fell more than 372 points, or 1.78 percent, in the worst day for the index since September.

What seemed like daily bombshells in the news for the past two weeks left White House officials visibly shell-shocked. It has stirred up fears that a major staff shake-up is afoot.

“You can see the distinct difference in the look in the eyes of folks around here,” a senior administration official said privately. “A lot of these people are campaign veterans. They’ve all been through the wringer. But then this week happens. You could see it in the eyes — they’re worried about their jobs, whether they can help the president or not. This was different.”

The communications team has been hit especially hard.

The bombardment began with confusion about the reason Mr. Trump fired FBI Director James B. Comey last week. Then a Washington Post report said the president divulged highly classified information to Russian officials during an Oval Office meeting. That was quickly followed by a New York Times report Tuesday of a Comey memo that purportedly documented the president in February urging an end to the FBI investigation of then-National Security Adviser Michael Flynn.

Signaling that he is more interested in closing ranks than bringing in replacements right now, Mr. Trump plans to take all of his top aides on a whirlwind tour of the Middle East and Europe beginning Friday.

White House press secretary Sean Spicer and deputy press secretary Sarah Sanders, who have taken the brunt of the media onslaught, also will travel with the president. That is especially reassuring to Mr. Spicer, who has contended with rumors that his job is on the line.

The nine-day trip couldn’t come at a more opportune time for Mr. Trump, providing an escape from the Washingtonmedia firestorm and allowing him to show leadership on the world stage for the first time.

Republican Party strategist Douglas Heye said it is just as well because a staff shake-up wound not solve the problems.

“Every crisis we’ve seen thus far has not been a problem of communications, Hill outreach or any particular staffer. It’s been about the president. Switching up staff doesn’t change that,” said Mr. Heye, a former top adviser to the Republican National Committee and longtime Trump critic.

Indeed, Mr. Trump has created much of the rumpus, such as changing his story about firing Mr. Comey and inviting the Russian officials to the White House amid accusations that he conspired with former Cold War foes.

Even some Republican lawmakers are openly urging the White House to get its act together.

“Clearly, the administration needs to take stock of its operations and the president needs to do a far better job of understanding the differences among the three branches of government — what’s appropriate, what isn’t appropriate,” Sen. Susan M. Collins, Maine Republican, said on NewsRadio WGAN in Portland, Maine. “He needs to right the ship. We cannot have this constant chaos and serious questions being raised virtually every single day. It is distracting from the ability to work on certain issues like health care reform, and the administration needs to get its house in order.”

Mr. Trump pins the blame on the news media, which he has long faulted for being dishonest and allied with Democrats against him.

White House aides increasingly echo that sentiment, saying the press is out of control.

“As Republicans, we are used to being mistreated by the media. We’re used to having the scrutiny that they don’t give anybody else. But we have never seen anything quite like this,” said a White House official. “We’ve never seen this type of unabashed self-righteousness and call to judgment. We are not allowed to make any mistakes. In the eight years previous, there were so many mistakes and nobody was called to task hardly at all.”

“The guilty-until-proven-innocent kind of mindset just gives us greater resolve to work harder and do a better job,” the official said. “For those who didn’t vote for the president, get over it. He won. This administration is going to do what it set out to do, which is to work hard for the men and women who haven’t been represented before. We really have a job to do.”

So far, Mr. Trump’s supporters are sticking with him.

“Donald Trump does extremely well under pressure. He’s extremely resilient, and when things get difficult, he really gets in tune. I think we saw that during the campaign,” he said. “This type of stuff actually makes him better and stronger in dealing with those crises. I think he’s going to respond in a way that’s going to be very positive.”

He said the proof will be Mr. Trump’s choice of the next FBI director, which could be announced any day.

“I think it’s going to be somebody the Democrats are going to be quite happy with — that’s my guess,” Mr. Ruddy said. “It’s going to be a sign that the president’s very committed to the FBI, he thinks extremely highly of the FBI as an institution.”

Republican strategist John Feehery of EFB Advocacy in Washington agreed that the barrage of negative news coverage has intensified since Mr. Trump’s election.

“There’s a conspiracy in the media to take him down,” he said. “I think they’ve hated him from the beginning. There’s also a lot of business in being anti-Trump. If you talk to The New York Times, talk to CNN, talk to MSNBC, they are getting a lot more clicks and a lot more viewers by being strongly anti-Trump. That creates a dynamic.”

He added, “You combine that business model with a natural antipathy toward Republicans, but especially to Trump, who the media by and large thinks is a chump and their disdain is seeping through their reporting. But they also have a business reason to be against Trump, because it’s good for business. It’s a combination of great for ratings and hate for Trump.”

If not a shake-up, he said, the president and his team have make other adjustments to counter the media bias.