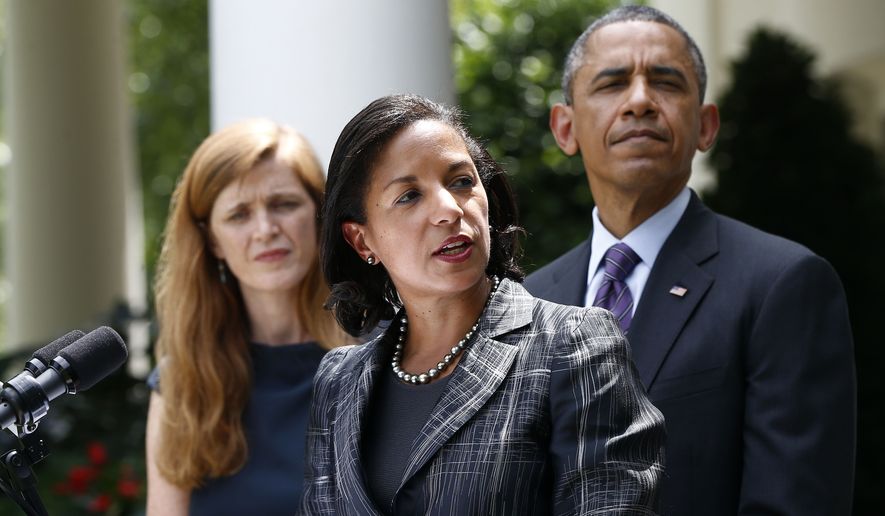 Details emerged this month showing Ms. Rice in 2008 was vetted for a national security post in the anticipated new administration and shared Mr. Obama’s willingness to work with enemies of the U.S.

“Rice also shares Obama’s openness to holding diplomatic talks with all countries, including America’s enemies, when it is in the United States’ interest to do so,” says a document sent to John Podesta, the Obama presidential transition team leader, on Oct. 31, 2008, and now Hillary Clinton’s presidential campaign chief.

The documents were among the more than 20,000 emails hacked from Mr. Podesta’s Gmail account and posted on the anti-secrecy website WikiLeaks.

The vetting documents were based on interviews and questionnaires with Ms. Rice, a former Africa staff member with the National Security Council and assistant secretary of state during the Clinton administration.

“Rice has advocated negotiations with so-called ‘rogue’ regimes, such as North Korea, to further U.S. objectives,” one document states. “Her writings have been critical of the Bush administration on this front.”

The document reveals that Ms. Rice is married to Ian Cameron, a Canadian who in 2008 was executive producer of ABC News’ “This Week.” It said the link posed a potential conflict of interest.

“The fact that Rice’s husband currently works as executive producer of ‘This Week ‘ could create potential conflict of interest issues if she has a significant policy role in an Obama administration, although those would largely be issues that ABC News would have to address, and Rice indicated that she and her husband had discussed the possibility that steps might need to be taken to remove the conflict in the event that she receives such a position,” the report said.

Another potential problem for Ms. Rice cited in the leaked emails was her role in the Clinton administration’s failure to take up an offer from Sudan’s government to counter al Qaeda leader Osama bin Laden, who was based in the North African state in the late 1990s.

The Khartoum government, in a bid to be taken off the U.S. list of state sponsors of terrorism, had offered the FBI access to intelligence files on bin Laden in 1996. But the Clinton administration ignored the offer, made in a letter to President Clinton. Ms. Rice was involved in the missed intelligence opportunity.

“Rice would have been involved in administration decision-making about Sudan both at NSC and in the State Department,” the vetting report says. “Rice denies that the Clinton administration missed meaningful opportunities to cooperate with the Sudan and attributes the criticism to a small number of specific detractors.”

An NSC spokesman declined to comment. One administration official, however, said: “It’s not news that Ambassador Rice shared — and continues to share — the president’s policy of engagement in furtherance of our national security, and that’s precisely what this administration has done over the course of nearly eight years.”

A member of the Pentagon’s defense policy board, a panel that advises the secretary of defense, revealed internal discussions by the board on the difficulties of dealing with an increasingly Islamist Turkey under Prime Minister Recep Tayyip Erdogan.

Stuart Eizenstat, a Washington lawyer and member of the policy board, provided details of internal Pentagon discussions with the Hillary Clinton presidential campaign. The Turkey assessment was contained in leaked emails obtained from Mr. Podesta, the campaign chairman.

The assessment was based on briefings in January by intelligence officials, diplomats and analysts. Mr. Eizenstat outlined the findings of the board meeting in an email to Mr. Podesta.

It was written before the failed military coup against Mr. Erdogan in July that led to a further crackdown.

“Turkey is a very difficult ally,” Mr. Eizenstat said. “Prime Minister Erdogan has taken Turkey in a more Islamic direction, and has cracked down hard on independent journalists, opposition politicians, and anyone he views as challenging him, including the military (15 percent of their flag officers are under arrest).”

Also, efforts to pressure Turkey to close its borders were described as “tricky” since both pro-Islamic State foreign fighters and fighters hostile to both the Islamic State group and Syrian President Bashar Assad have entered Syria through Turkey.

Mr. Eizenstat said the policy board was divided on how to deal with Ankara under Mr. Erdogan. “A few felt we should adopt a tougher tone but a majority felt we should be exploring ways to take advantage of Turkey’s economic problems and security threats to draw him closer to the U.S.,” he said.

The board was told that the turning point for Mr. Erdogan’s shift from pro-Western to authoritarian Islamism was the cutoff of European Union accession talks, a longtime Turkish foreign policy priority.

Former Secretary of State Henry Kissinger told the board that it was a “fantasy” to think Mr. Erdogan will become more pro-Western since he remains firmly pro-Islamist.

The policy board was told that despite the country’s “sharp turn toward Islam,” Turkey remains more democratic and pro-Western than other Muslim states in the region, with around 45 percent of the Turkish business community, parts of the military and secular population favoring better ties with the West.

The board recommended that Defense Secretary Ashton Carter, who sat in on one board meeting, adopt a “transactional” relationship with Turkey because a “strategic partnership would be difficult.”

Among the options are holding a strategic dialogue with Turkey, similar to talks that the U.S. regularly conducts with China, “to better understand their concerns, and where our interests overlap.”

A draft congressional commission report has concluded that China is not cooperating with the United States and others in Asia to pressure North Korea into halting its nuclear and missile programs.

“Following a slew of missile and weapons systems tests demonstrating alarming advances in capabilities, in September 2016 North Korea conducted its fifth nuclear test, which was the most powerful to date,” says the latest draft of the annual report by the U.S.-China Economic and Security Review Commission.

Beijing publicly condemned the latest nuclear test, but the bipartisan commission said “given its track record, China can be expected to unevenly enforce sanctions in a way that will not seriously destabilize the Kim [Jong-un] regime.”

Also, increased North Korean missile and nuclear tests will not lead Beijing to cut off trade and critical resources like coal and oil, despite demands that Beijing pressure its ally, the report said.

Worse, the announced deployment of the U.S. Terminal High Altitude Area Defense, an advanced missile defense, in South Korea is being viewed by China as a “direct threat.” China has begun using the THAAD deployment to obstruct international and regional cooperation on North Korea.

The report, to be released formally next month, recommends that the United States strongly support missile defenses against North Korea in the region.

“North Korea’s demonstrated progress in missile and nuclear capabilities recently has prompted the need for U.S. allies in the region to deploy more advanced ballistic missile defense systems,” the report says. “Any statement from Congress that can help emphasize the United States is concerned with North Korea’s belligerence and increased threat to Northeast Asia and take the actions necessary to protect its allies is helpful.”