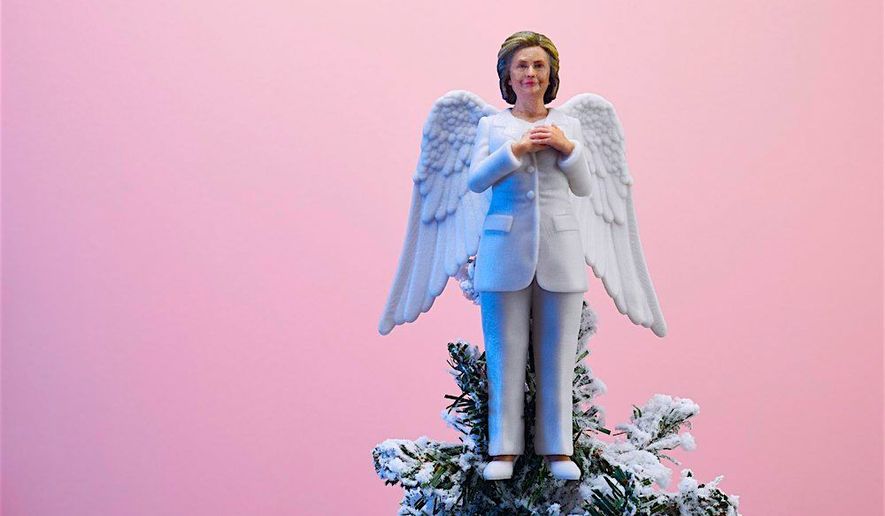 And the legend goes on, or something like that. Now on sale, it’s the Hillary Clinton Tree Topper, which features a very life-like plaster figurine of Mrs. Clinton with feathery angel wings and pristine white pantsuit, meant to go on the top of the Christmas tree. Actually, the Hillary Topper is ideal for the “Resistmas” tree. Yes, the Democratic holiday lexicon now includes the handy term “Resistmas” for those who still have not come to terms with the 2016 election.

But back to the plaster Hillary.

“She is most presidential of tree toppers, 3D sculpted in her iconic power suit with angelic wings, 3D printed to order with pinpoint accuracy, with a simple wire tie threaded through holes on her back to safely secure to your tree,” notes the description from Women to Look Up To, a British nonprofit promoting “female equality” and offering the decoration, along with versions based on Beyonc, Serena Williams, Angelina Jolie and other famous women.

“She’s the First Lady of Christmas tree decorations. Christmas tree topper, angel, or fierce fairy — now she’s a woman to look up to,” the organization promises, though the prices for the pricey Hillary ornament start around $107 for a version suited for a typical tree.

“There’s no word yet, however, on whether it smells of sorrow and corruption instead of the traditional fir tree scent,” writes Emily Zanotti, a writer for The Daily Wire.

Incidentally, those who attended the big Women’s March on the nation’s capital and other cities back on Jan. 21 have not forgotten the event, famous for pink knitted “pussy hats” and feminist slogans. Plans for the anniversary of the event are already in motion, and they include an official commemorative book titled “Together We Rise: Behind the Scenes at the Protest Heard Around the World,” complete with essays by Sen. Tammy Duckworth, Rep. Maxine Waters and many more. The hardcover book weighs in at 320 pages and showcases organizers now “sustaining and building on the widespread outrage, passion, and determination” of the event.

President Trump’s recognition of Jerusalem as the capital of Israel on Wednesday created an instant, global media frenzy full of conflicting opinions and often hasty conclusions. Without further ado, some representative headlines:

Read it and weep. Or laugh. Sen. James Lankford has just released “Federal Fumbles: 100 Ways the Government Dropped the Ball,” a helpful collection of incidents that detail budgetary outrages within federal offices. The Oklahoma Republican showcases about $500 billion — yes, billion — of wasteful spending through research grants, misuse of funds and expenses not particularly in the public interest.

“It is appropriate for Congress to provide federal agencies with the necessary funds and tools to accomplish their mission and protect or serve our nation. However, it is essential for Congress to ensure those agencies are doing the right thing, the right way,” Mr. Lankford says.

Among the programs, he cites “social security” for retired research chimpanzees, $2.6 million of research on the Alaskan stickleback fish, $75,000 to create digital puppets, $20,000 for an art camp for grownups and a $2.3 million study to determine if exercise can help senior citizens lose weight.

UNSUNG HEROES AT THE TRUMP HOTEL

An event of note at the Trump International Hotel, located three blocks from the White House and every inch a monumental and stylish presence in the nation’s capital: “Defenders of Liberty” were recognized at the Impact Awards staged Wednesday at the spectacular hotel.