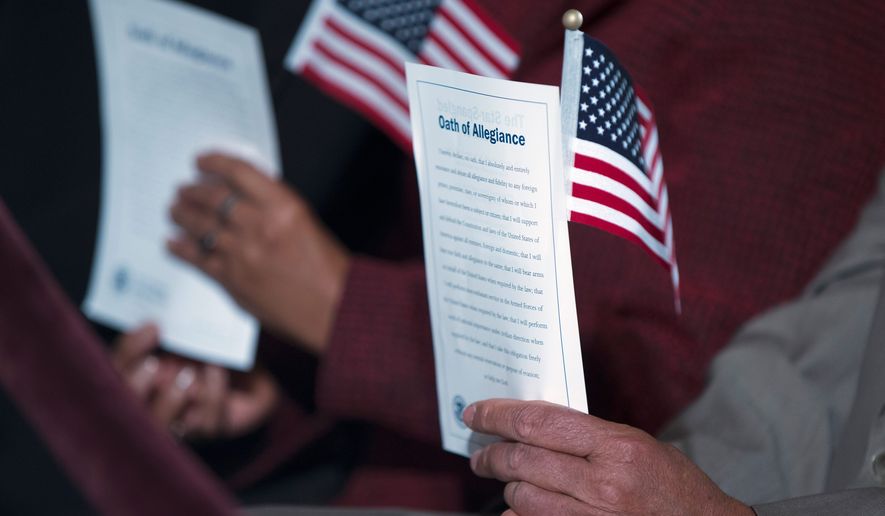 The anti-Trump immigrant voter surge has failed to materialize, as advocates’ hopes of recruiting 1 million green card holders to become citizens in time to vote have fallen short.

From December, when the advocates announced their effort, to the end of June, which marks an informal application deadline for citizenship before Election Day, some 600,000 naturalization applications were filed with the immigration service.

That was 9 percent more than the same period in 2012, the previous presidential election year, but way less than the 1 million that advocates sought, and it doesn’t come close to other citizenship surges.

Hispanic rights groups say they are now trying to sign up citizens who have never registered to vote. But even there, the groups are reportedly facing a funding shortfall that is sapping their energy.

Advocates were counting on Republican presidential nominee Donald Trump to help energize Hispanics eager to punish him for his stern stance against illegal immigration. They say they are still confident of a large turnout in November despite the naturalization numbers.

“If you spend any time in my district or in Puerto Rican, Mexican or immigrant communities anywhere across the country, you will see for yourself that this is going to be a historic election and that Trump is a voter-mobilization machine,” said Rep. Luis V. Gutierrez, an Illinois Democrat who joined the citizenship effort.

Making matters even tougher is a backlog at U.S. Citizenship and Immigration Services. Nearly 525,000 applications were awaiting approval on June 30, up from about 388,000 at the beginning of January.

That makes it iffy whether all of those who are in line will get through in time, leaving perhaps tens of thousands of would-be voters out of luck.

USCIS said it won’t be swayed by the election deadline but is trying to work through the backlog.

“We will adjudicate pending applications as quickly as possible. We are managing our resources, including focusing manpower where it is needed,” said James McKinney, an agency spokesman.

Advocates said they hoped the agency could speed up the process for the sake of customer service if not for the election.

“From a customer service standpoint, you would want to address a backlog,” said Rosalind Gold, senior director of policy, research and advocacy at the National Association of Latino Elected and Appointed Officials Educational Fund, which said it has been encouraging the agency to shift resources.

Advocates went into this year optimistic about their chances of hitting 1 million enrollments. They pointed to the 8.8 million immigrants who had been in the U.S. for at least five years as legal permanent residents, making them eligible to apply for citizenship. Those immigrants are heavily Hispanic, and 30 percent are Mexican.

Last year, Mr. Trump vowed to crack down on illegal immigrants and said Mexico was sending rapists and other bad elements of society to the U.S.

The citizenship drive was intended to be a first rebuke to Mr. Trump, followed by a massive effort to register and turn out Hispanics on Election Day.

Latino Decisions, a Democrat-leaning polling firm, said there is more enthusiasm among registered Hispanic voters to go to the polls this year compared with 2012 and that those voters will overwhelmingly back Democratic presidential nominee Hillary Clinton. The firm’s latest research says Mrs. Clinton would win 70 percent of the vote, compared with 19 percent for Mr. Trump.

James G. Gimpel, a political scientist at the University of Maryland, said he sees Mr. Trump’s vote among Hispanics at about 25 percent.

“He’s not going to do that much worse than Romney did, and he may well do better,” the professor said.

Like other voters, he said, Hispanics have competing issues on their minds. “If the Trump campaign maintains a focus on improving economic conditions and creating prosperity, Trump will do better with Hispanics, as he will with other voters. If this focus is lost, he will not do as well.”

“Senate Democratic candidates have work to do in order to maximize support from Latino voters. That starts with clearly articulating how they and their opponents differ on immigration, a threshold issue about inclusion, as well as a personal, family issue for many,” said Lynn Tramonte, deputy director of America’s Voice.

Ms. Gold at NALEO said part of the struggle is that national campaigns tend to focus on swing states but 57 percent of adult Hispanic citizens live in California, Texas, New York and Illinois — which aren’t considered battlegrounds in the presidential race.

“If we’re going to have sustained momentum in promoting participation and mobilizing Latinos to participate in our elections, we have to have a 50-state strategy, and we have to have a strategy that just goes beyond the presidential elections,” she said. “If you do not have good effective outreach to Latinos, good effective outreach to naturalized citizens, it will have an impact.”