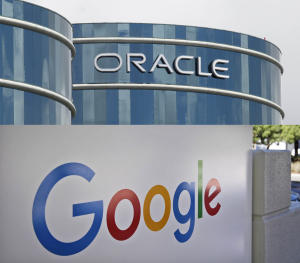 SAN FRANCISCO — Google scored a major legal victory against Oracle on Thursday when a federal court jury ruled that the search giant was within its rights to use Java programming code to build its Android operating system.

While the unanimous decision, reached after three days of deliberation and a two-week trial studded with testimony from tech luminaries, will be cheered by many in the developer community as a triumph for Silicon Valley innovation, Oracle immediately vowed to appeal, ensuring that the epic six-year battle is far from over.

The Redwood City-based cloud-computing behemoth claimed Google owed it as much as $9 billion in damages for stealing its software and making billions from it.

But Google was able to convince the jury of eight women and two men that it had done nothing wrong when it used some of the Java code to create Android, even though the material was copyrighted. During the case before U.S. District Court Judge William Alsup, Google argued that Sun Microsystems, which created Java in the 1990s long before it was bought by Oracle, had no problem with Google using the code without a license.

Dorian Daley, Oracle’s general counsel, said immediately after the verdict that the company will continue its fight for Java. “We strongly believe that Google developed Android by illegally copying core Java technology to rush into the mobile device market,” he said. “Oracle brought this lawsuit to put a stop to Google’s illegal behavior. We believe there are numerous grounds for appeal.”

Google lawyer Bob Van Nest said he was “grateful for the jury’s verdict.” In a statement, Google said the result was “a win for the Android ecosystem, for the Java programming community, and for software developers who rely on open and free programming languages to build innovative consumer products.”

In after-hours trading, shares in Oracle were down 0.2 percent and Alphabet, Google’s parent company, were up about 0.2 percent.

Thursday’s verdict marked the end of a second go-round in the case. In 2012, Alsup ruled that the software could not be copyrighted. But on appeal, a federal court reversed his ruling, finding that Oracle was entitled to copyright protection. When the U.S. Supreme Court refused to take the case up, the dispute returned to Alsup’s court for jurors to decide if Google’s actions were protected by fair use, which would allow it to freely harness small portions of copyrighted material.

Mitch Stoltz, senior staff attorney for the San Francisco-based digital-rights group, the Electronic Frontier Foundation, agreed that the outcome was a win for developers. But he said the verdict does not invalidate the appellate ruling that the Java application program interfaces at the heart of the case can be copyrighted. He said that leaves open “the potential for mischief” in the future.

Tyler Ochoa, a law professor at Santa Clara University, said an Oracle victory could have had profound implications for the way Silicon Valley innovates and operates. It also could have spawned a barrage of new legal skirmishes with “software copyright being used as a tool by lawyers for all sorts of companies going after their competitors.”

During the trial, jurors listened intently to hours of often dry testimony about sometimes esoteric computer language. At one point during deliberations, the panel was stymied by a jury-room computer overwhelmed by the millions of lines of code that Oracle lawyers had included as evidence for them to consider.

Google argued that the company’s use of the material was “transformative” because it was used to create something entirely new, a critical point in persuading jurors that Google’s actions were protected under the legal concept of fair use.

“We believed it was permissible to use the language without a license,” Google’s Schmidt testified. Schmidt, who once worked for Sun, said the two companies had a clear understanding that it was fine for the search giant to copy a series of so-called “labels” in the Java language, which developers then use to make their apps run.

But Oracle’s lead attorney, Peter Bicks, insisted that what Google had done was just plain wrong. “This is a very important case with a lot at stake and it involves fundamental principles of fairness,” he told jurors in his opening statement. “We’ll show how Google acted outside of acceptable business conduct.”

At one point, Bicks told the jurors “three billion phones have been activated with Oracle property inside.” He said Google made a “deliberate business decision not to take a license and to copy and use Oracle’s valuable software illegally. Why? Huge profits.”

Telling the jury in his opening statement, and repeating it again in his closing, Bicks said Google “broke a basic rule — you don’t take somebody’s property without permission and use it for your own benefit. That’s what this case is about.”

UC Berkeley law professor Pam Samuelson said the litigation was a “very unusual” fair use case, which presented a challenge for Google’s attorneys. She cited several reasons why she thought the jury agreed with the fair use defense, including the fact that “Google was the one who made an innovative and highly successful product from Java.”