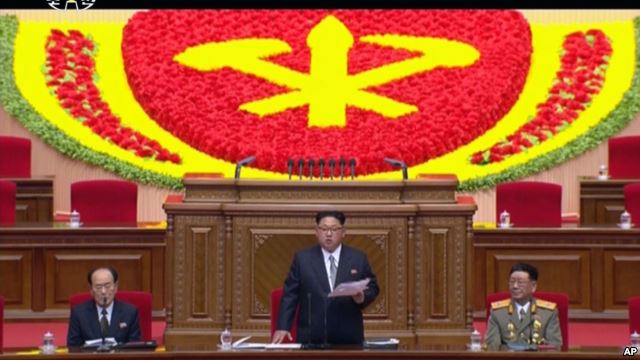 The assessment came a day after North Korea ended its four-day party congress, widely seen as a political event that cemented Kim’s rule.

Suh said the party gathering mainly served to pave the way for Kim’s long-term reign in the country.

“By creating a new title in the party, the regime institutionalized Kim’s rule,” said Suh, referring to Kim’s assumption of the post of party chairman, in a phone interview with VOA Tuesday.

Considering Kim is still young and lacks the kind of authority that his father had, the regime is likely to intensify efforts to glorify the young leader and tout his achievements, according to Suh.

Recently, some analysts in Seoul have raised the possibility of a sudden collapse of the regime, citing a series of high-profile defections. In a rare move, a group of 13 North Koreans who worked at the same restaurant in China defected to the South last month. South Korean officials linked the defections to a possible indication of destabilization of the regime.

Since Kim took power in late 2011, the North Korean military has been ceding decision-making influence to the party. The recent party gathering is likely to further the power shift.

“The reshuffle of senior officials during the gathering clearly showed the military’s influence has waned,” said Yang Moo-jin, a professor at University of North Korea Studies in Seoul.

Some defectors in Seoul say a military coup in the North is a real possibility, noting the military’s growing frustration with the regime.

Last week at a forum in Washington, Wendy Sherman, a former U.S. diplomat who most recently served as Under Secretary of State for Political Affairs, suggested Washington and neighboring countries discuss how to respond to a “sudden collapse of the regime or coup” in Pyongyang. Sherman said it is “becoming increasingly clear” that such a scenario cannot be ruled out.

Suh cautioned against such speculation.

“Given the current situation in North Korea, it is almost impossible for the military to attempt a coup against the regime,” the former official said.

“The regime maintains tight control over nearly every segment of the society, removing potential threats. In addition, it seems there are no alternative forces inside the country that can ally themselves with outsiders,” he added.

The North Korea expert, however, warned Kim’s own ruling style and personality could pose threats to the regime, characterizing his rule as a “reign of terror, frequent purges, and cruel executions.”

“He set a precedent that even a member of the royal family can be executed,” said Suh, speaking of the 2013 execution of Jang Song Thaek, Kim Jong Un’s uncle.

Kim’s nuclear policy is also different from his father’s.

“While Kim Jong Il tried to keep ambiguity about the country’s nuclear capabilities, Kim Jong Un is eager to show off the capabilities,” Suh said.

The former official blamed Kim’s sense of insecurity about power, caused by a short power succession period, as a probable cause for the differences.

Suh, a professor at Ewha Womans University in Seoul, has been following North Korea closely since 1980. He took leading roles in arranging two inter-Korean summits in 2000 and 2007.

Kim Hwan Yong in Seoul contributed to this report, which was produced in collaboration with VOA Korean Service.