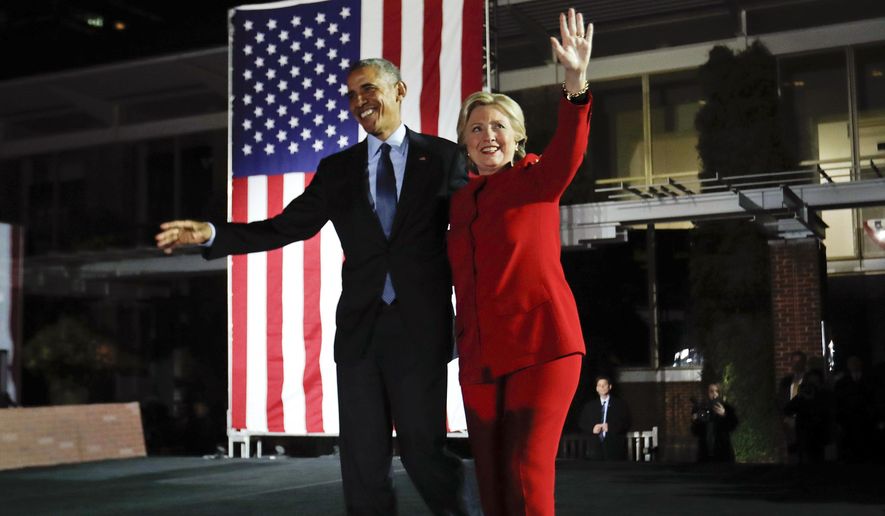 Hours before the polls open, the Clintons and Obamas appeared together on stage in Philadelphia Monday night and cast Tuesday’s presidential election as a fork in the road of American history, an opportunity for voters to continue forward or “turn the clock back” by embracing Republican Donald Trump.

The star-studded rally — which included performances by Jon Bon Jovi and Bruce Springsteen, and addresses by Chelsea Clinton, former President Bill Clinton and first lady Michelle Obama — represented Democrats’ closing argument. Addressing tens of thousands of people in front of Independence Hall, President Obama said that he’s confident the American people, despite the contentious nature of the 2016 election and the bitterness that’s been laid bare over the past 12 months, already know deep in their hearts that Mr. Trump would take the nation to a dangerous place.

“I am betting that tomorrow you will reject fear and you’ll choose hope,” the president said in one of his final major speeches before leaving office in January. “I’m betting that the wisdom and decency and generosity of the American people will once again win the day. And that is a bet that I have never, ever lost.”

Mr. Obama and Hillary Clinton each framed Mr. Trump’s vision for America as one that would erode the rights of minorities, women, LGBT Americans, Muslims, and the disabled. The former secretary of state also appealed to Americans to deliver her a resounding victory – the type of win that would throw cold water on any claims by Mr. Trump that the election had been “rigged” against him.

“Let’s show tomorrow there will be no question about the outcome of this election,” she said. “I am not going to let anybody rip away the progress we’ve made and turn the clock back, sending us back in time where people are free to question the foundations of our country.”

The president echoed those sentiments, framing a vote for Mrs. Clinton as a moral obligation.

“Throughout this campaign, Donald Trump has shown utter contempt for the values that make this nation great,” he said. “Anyone who sees women as objects, minorities and immigrants as inferior, other faiths as presumptively un-American, cannot lead this diverse, big-hearted country that we love.”

Following the Philadelphia event, Mrs. Clinton traveled to Charlotte for her final rally of the campaign season.