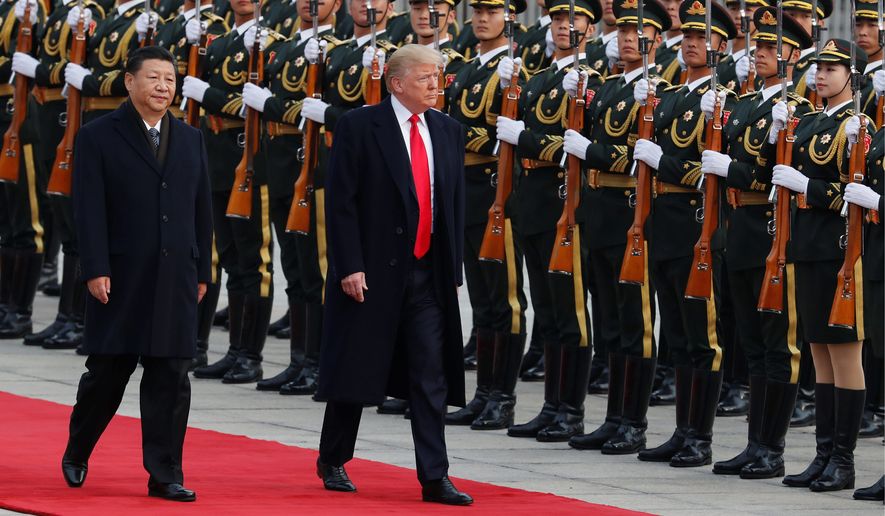 China’s People’s Liberation Army has confirmed the latest flight test of the newest and most powerful intercontinental ballistic missile known as the DF-41.

“It is a normal practice for China to develop missiles as scheduled, and it is not against any specific country, region or target,” Senior Col. Wu Qian, a Chinese Defense Ministry spokesman, said last week.

“We always follow our national defense policy, which is defensive in nature, and a military strategy of active defense,” he said. “We develop weapons and armament only to meet our need of national security.”

Col. Wu was responding to the Inside the Ring column of Nov. 22 revealing that the new multi-warhead missile was secretly test-fired two days before President Trump’s visit to China.

China has used its missile and aircraft tests in the past to send political messages. An April 12, 2016, test of a DF-41 took place three days before a high-profile voyage by the aircraft carrier USS Stennis in the South China Sea that was visited by then-Defense Secretary Ash Carter.

The Chinese spokesman sidestepped questions about when the new missile will become operational.

However, the state-run People’s Daily newspaper reported two days before the Defense Ministry press conference that the DF-41 is on track to be deployed sometime next year.

The newspaper, without mentioning the Nov. 6 flight test, quoted Chinese missile expert and retired PLA Col. Yang Chengjun as asserting the DF-41 experienced no test failures since the program compared to U.S. and Russian missile tests that were less than perfect.

“DF-41 is fourth-generation and China’s latest strategic missile,” said Col. Yang, who described the system as quick, mobile and precise.

The Chinese expert said the DF-41 is comparable to U.S. Minuteman ICBMs and Russian SS-27 but with greater capabilities with respect to some technology.

The DF-41 will carry six to 10 warheads, an indication that China is in the midst of a quantum increase in its strategic nuclear warhead capabilities. Its range is 7,456 miles with an accuracy for hitting targets within 328 feet of its aim point. The missile will be China’s most advanced ICBM with enough range to cover the entire United States.

Col. Yang said the missile will be launched from three different platforms: road-mobile and rail-mobile launchers and silos.

“The missile can hit every corner of the Earth, allowing China to counter a nuclear strike on the country,” Col. Yang said.

Defense Secretary Jim Mattis explained to reporters this week why he does not want to talk about hot spots around the world like the Korean Peninsula, where U.S. military forces have been conducting high-profile exercises.

The secretary was asked following a trip to the Middle East about comments made recently by Sen. Lindsey Grahamabout whether the United States should evacuate American civilians from South Korea over increased tensions with Pyongyang.

“I don’t comment because, every day, someone is saying something,” Mr. Mattis said, noting that democracies hold robust discussions and reacting to comments like that could distract him from focusing on the issues.

“And you know where I stand on this as we try to resolve this with diplomatic means,” he said.

“So, I think right now there are some issues that I know it’s frustrating for you all,” he told reporters. “But if they are not handled in private, political maneuver room can be reduced. In other words, even by going into some of this in the open, we can reduce other nations’ ability to look like they’re acting on their own rather than to something.”

Mr. Mattis said that, while it may be frustrating for reporters that he withholds comment on such issues, the caution is based on concerns about misstatements.

“I don’t control once those words are out there,” he said. “I think it was [late Singaporean leader] Lee Kuan Yew who said, ‘Words are very precious things. Once they’re let out, they can never be recalled.’ So in this question, I don’t want to have to try to recall words because it’s a dynamic situation, but it remains diplomatically led right now, even as we exercise in order to keep the military options available.”

U.S. war games in South Korea included a flight of a nuclear-capable B-1 bomber from Guam that on Wednesday joined advanced F-22 and F-35 fighters.

Apple Inc. CEO Tim Cook traveled to China this week and called for adopting conciliatory policies toward the communist dictatorship in Beijing.

Mr. Cook said in a speech that companies doing business in China should abide by the arbitrary dictates of the country they operate in.

“When you go into a country and participate in a market, you are subject to the laws and regulations of that country,” Mr. Cook told the Fortune Global Forum on Wednesday in Guangzhou.

“Your choice is: Do you participate or do you stand on the sideline and yell at how things should be?” he said. “My own view very strongly is you show up and you participate, you get in the arena, because nothing ever changes from the sideline.”

Mr. Cook said that as an American, “I believe strongly in freedoms,” but then added: “I also know each country in the world decides their laws and regulations.”

The Cyberspace Administration of China, which has been behind the crackdown on internet freedoms in China, organized the conference where Mr. Cook spoke.

The Apple CEO came under fire in October when Sens. Ted Cruz, Texas Republican, and Patrick J. Leahy, Vermont Democrat, criticized the tech giant in a letter after news reports revealed the company had caved in to Chinese pressure and removed more than 600 virtual private network (VPN) apps from products sold in Apple’s stores in China. The VPNs are used by Chinese website users to access free and uncensored news and information from the internet.

“If these reports are true, we are concerned that Apple may be enabling the Chinese government’s censorship and surveillance of the internet,” they said.

The senators noted that Mr. Cook received the Newseum’s Free Expression Award this year and in his acceptance speech said Apple works to defend freedoms “because companies can and should have values” allowing people to speak up.

“While Apple’s many contributions to the global exchange of information are admirable, removing VPN apps that allow individuals in China to evade the Great Firewall and access the internet privately does not enable people in China to ‘speak up,’” Sens. Cruz and Leahy said.

“To the contrary, if Apple complies with such demands from the Chinese government, it inhibits free expression for users across China, particularly in light of the Cyberspace Administration of China’s new regulations targeting online anonymity.”